Called the 3×3 cross-training program, it is a system in which employees are trained to become proficient in at least three different positions, and each job can be performed by at least three employees.

Such tasks include running a printing press, ink mixing and color matching, laminating, or working in shipping, receiving, or in the warehouse. 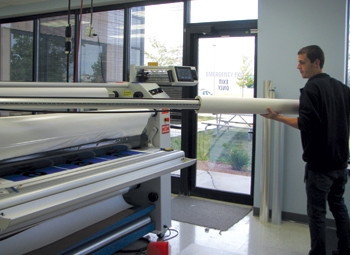 Press operator Daniel Kerlin likes the 3×3 cross-training program because it allows him to learn new positions and makes him a more valuable employee.

“What we want is for every employee to have at least three pieces of equipment or processes that they are rock stars at,” said Jeff Kerlin, president and chief operating officer of the Menomonee Falls-based label manufacturer.

The employees are rated at an A, B or C level. A means the employee is fully trained; B means the employee is trained, but not proficient in all aspects; and C means the employee is moderately trained.
The more positions in which an employee becomes proficient, the more he or she is rewarded financially.
“They’re more valuable to us, and they want to make more money,” Kerlin said. “It’s a win-win.”
The components of the 3×3 program are organized with an Excel document that lists the positions horizontally and the employees vertically.
Any position that does not have three employees who are rated an A is highlighted in red, as are any employees who have not received an A in three areas. This shows supervisors which areas need further improvement and which employees need more training.
The time it takes to achieve an A depends on the complexity of the position and the availability of training, Kerlin said. Sometimes it can take four to six months, but most employees, especially the newer hires, are typically fully trained in a year.
Besides having other employees capable of filling in for a coworker who is out sick, Kerlin said the 3×3 program has many more advantages.
One is that it allows the company to discover an employee’s strengths, and for that employee to find a more fulfilling career. 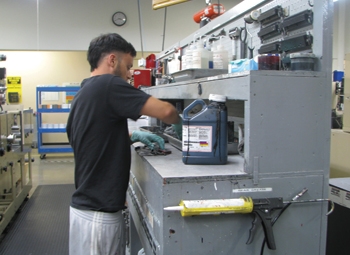 Press operator Mike Arrigo has earned A ratings, meaning he is fully trained, in six positions.

For instance, one employee started as a temp before becoming a permanent employee working in the plant. By cross-training her, the company learned that she excelled at computers and customer service, and she ultimately was promoted to the customer service department.

Kerlin said Tailored Label “promotes promoting from within,” and all employees take a strength finder test in order to find out where they will be most happy and successful.
Tailored Label runs three shifts a day, with the first shift fully staffed; the second shift half staffed; and the third shift one-third staffed. Since all plant employees are cross-trained, however, Tailored Label is capable of staffing any piece of equipment at any time of day should a customer have an urgent need.

Another benefit of the 3×3 program, according to Kerlin, is that it fosters teamwork.
“Instead of, ‘this is my press and this is your press,’ it’s, ‘these are all our presses, and we all do what we have to do to have our team win.’”
With the 3×3 program, employees do not know which position they will get assigned to on any given day.
“We’ve found that our high-performing, high-potential employees love the diversity and the chance to prove how great they are, and the less high achievers don’t. They are more intimidated by it and don’t embrace it,” Kerlin said.
Consequently, he finds the 3×3 program is a good vetting process in determining which temporary employees might make good permanent employees.
The cross-training, however, is an ongoing process, as Tailored Label frequently brings in new equipment.
“As quickly as possible, we route people through there,” Kerlin said. “Training is expensive, but it pays huge dividends.”
Training can be costly, not only to send employees to local technical colleges, but also from the lost production time while employees are training.
Each employee spends, on average, one month per year cross-training, which equates to 8 percent of the company’s payroll spent on training.
In addition to local technical colleges, employees are trained on the job under the guidance of a fellow employee. They also attend webinars, lunch and learns, and classes taught by other employees.
The 3×3 program is specifically geared toward manufacturing and customer service employees. For customer service, each account has a primary customer service person and two other employees who are fully trained on it.
Out of Tailored Label’s approximately 115 employees, Kerlin said about 80 are formally involved with the program.
Kerlin said the program did initially receive some pushback when it first started about eight years ago, as employees were comfortable doing what they had been doing. It was also questioned whether or not some people who had been doing the same job for 15 years could do something different.
Now, however, Kerlin asserts the program is embraced by employees.
For instance, press operator Dave Sella said he likes that he is more valuable to the company. Sella, a 10-year employee who has seven As, said initially he had to get used to the routine of doing different things every day, but he grew to like it.
“It makes my day go faster,” he said. “I like the variety and seeing different jobs…You just don’t get bored now on the same thing.”